So, 7 months since my last post, here we are.  I haven’t been running regularly and I certainly haven’t been blogging.  In 2014 I’ve done Leeds and Sheffield Half Marathon in average times (for me) and some training runs, but nothing I’d describe as structured training.

But then (but then…..) dun dun duunnn…there was a little note in my diary on June 22nd that said ‘start marathon training’.

Yep, not only did I enter York again, it’s in just 4 months time.

So, running resumes and regular blogging resumes – every Wednesday, I promise.

This year I’m following the Women’s Running Improver Marathon Plan.  It’s 4 months compared to the 6 month plan I followed last year and comes recommended by a runner I respect who blogs here.  The plan will give me plenty of time to cross train (I’ve kept up the weights and am doing regular spin classes) and I hope to avoid the overuse pains I developed towards the end of my training last year.

I was thwarted on my first training run by the railway tunnel closure on Hob Moor (thanks, running gods!) but things can only improve from here.

See you on the streets.

20th October was the big day and the one I’ve been building up to for 6 long months of training.  It’s been particularly tough with all the building work we’re getting done and having no kitchen for 4 weeks, but I think my training has kept me sane in a way.

Here’s how my day with 6500 other runners went.

Oh I do approve of local races!  The husband had been able to book a parking space for us a David Lloyd’s gym (thanks David Lloyd’s!) which was only a stones throw away from the start line.  I was able to get up at 6.45, have a porridge breakfast and still get there with plenty of time to spare.

The start line seemed very quiet compared to some of the other runs I’ve done, but the baggage area looked well organised.  There were lots (and I mean lots) of portaloos for pre-race wees which I’m always happy about.

We were put into pens about an hour before the start and did a mass warm-up, the start then got away on time.  I was at the back in Zone 5 so I had that odd disconnected moment when you know the race has started but you personally won’t be going anywhere for a while.

For a marathon, the route is very nice and mainly flat apart from one steepish hill.  The first 10k takes you into the centre of York and then you’re out into the countryside and through the villages.  The spectators were great and so were the marshalls, really buoyant and cheerful which helps.

There were 2 sections on the route where runners doubled back on themselves. I don’t mind these normally because it’s good to reassure yourself that there are people still behind you. The first one was quite short so not too bad, but the second one went on forever and I could have done without it.  There was no timing chip at the bottom either, so I wonder how many runners were tempted to just cross the path?

The marathon featured Runner’s World pacers who wore flags on their backs for the finish time they were pacing – what a great idea and what great people.  I stuck with the 4.45 guy for about 10 miles before I had a wobble and lost him.

The finish line was downhill, hoorah!  The announcer read people’s names out as they finished, and then runners were herded off to collect their goody bags.  My only criticism of the finish is it’s a real maze in the York Uni buildings – had the husband not found me I might not have found him.

The goodie bag was very good – a medal and a t-shirt with FINISHER in massive letters on the front.  Also some food, including a packet of cheese and onion Seabrooks which were amazing for salt replacement.

My goal for the marathon was anything under 5 hours, and I got 4.57.55 which I’m delighted with.  Maybe I could have done a bit faster, but I finished well and uninjured and happy.

See how happy I am 🙂 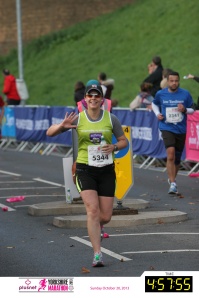 I’ll post some thoughts on marathon training in general next week and then decide what to do with my blog – maybe I’ll keep it going for my next run as it’s really helped me focus with my training.

A Liveaboard Who Doesn’t Know Anything About Boats

Come ramble with me...

The Adventures of Captain Ray Penson

The excellent adventures of Alex & Jac

Because pedagogy is a public practice.

My five year journey to awesomeness...

Believe In The Power Of The Run.

Sensemaking and Analytics for Organizations